This is actually one of the most inspiring books on the development of classical music practice in the 21st century. Unfortunately it is only available in Dutch. 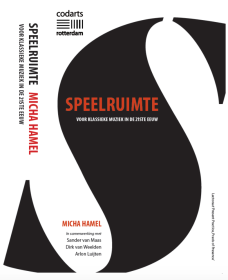 The brain behind the book is Micha Hamel, one of the multi-talented, brilliant brains of the Netherlands. Hamel is a classical trained composer and conductor, highly rewarded poet,  theater maker and since 2015 member of the Academy of Arts. Co-Authors include Sander van Maas, Dirk van Weelden en Arlon Luijten.

Micha accepted to carry out an artistic research project by the  Conservatory Codarts in Rotterdam/ NL around the major issue of: How will classical music praxis develop in the contemporary world and what is the role of musicians in it.

His starting point is the observation of a fundamental cultural change. The cultural practice of studying an object (or in our case: music) in order to detect meaning through  the interpretation of that object is in decline. Our cultural practice today is rather becoming a culture of presence: cultural events today need to be tangible and need to have an impact on our senses and our bodies (Gumbrecht) in order to develop relevance for the individual. A classical music scene that wants to be relevant to their societies needs to adapt to that fundamental change.

One part of the book is a philosophical approach to those issues. The other part is a documentation of attempts to develop new approaches to allow classical music a new life in that new surroundings.

At the bottom of this post you find a link to one of the experiments that were carried out. The assumption here was that a concert would gain more attention if it concentrates on the performer rather than on the music. In this experiment the repertoire was not published. The artist – pianist Takafumi Mori –  was what it was all about. He performed music he loves and the audience was provided with additional informations on several screens: f.e. about the players ideas and opinions about music and life in general. The audience learned about Mori’s observation that fingernails grow faster when he was not feeling comfortable. And at some point during the performance a casket was handed around  in which a cut of the players fingernails were exposed as a very personal token of his life as a performer.

One of the interesting results of that experiment was that NO MEMBER OF THE AUDIENCE ASKED what repertoire had been performed. And this is remarkable as the testing facility was a conservatory.